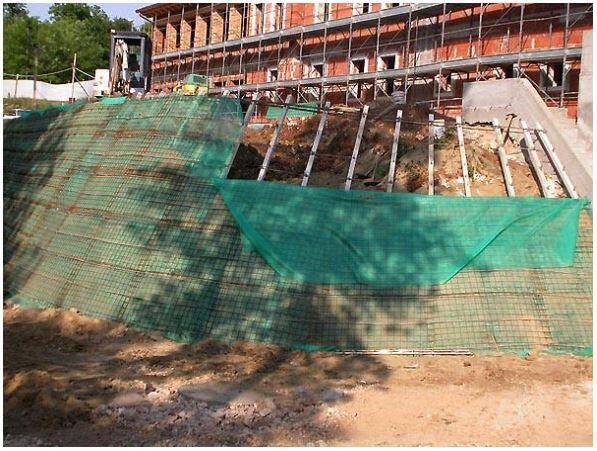 Geotextiles are permeable geosynthetic fabrics (textiles) that can separate, filter, reinforce, protect, or drain when used in conjunction with soil. As the use of geotextile fabrics has grown, so has the creation of geotextile composites and products like geogrids and meshes. Geotextiles and associated materials/products are the umbrella term for these materials. Roads, airfields, railroads, embankments, retaining structures, reservoirs, canals, dams, bank protection, and coastal engineering are among the many civil engineering applications where they are beneficially used.

Geotextiles are employed as an integral part of a human-made project, structure, or system with foundation soil, rock, earth, or any other geotechnical engineering-related material. AASHTO (M288-96) specifies geotextile strength standards in the United States of America. In Europe, EN 13249:2016 specifies the relevant characteristics of geotextiles and geotextile-related products used in the construction of roads and other trafficked areas (excluding railways and asphaltic inclusion), and the appropriate test methods to determine these characteristics. According to EN 13249:2016, the intended use of these geotextiles or geotextile-related products is to fulfill one or more of the following functions: filtration, separation, and reinforcement. The separation function will always occur in conjunction with filtration or reinforcement, and hence will not be specified alone.

The different functions of geotextiles in soils are:

Geomembranes are impervious membranes that are frequently utilized as cut-offs and liners. Geomembranes were mostly utilized as canal and pond liners until recently; nevertheless, one of the most common current uses is the containment of hazardous or municipal wastes and their leachates. Geotextile or mesh underliners are used in many of these applications to support or protect the more flexible geomembrane while also functioning as an escape route for gases and leachates generated in specific wastes.

Reinforced earth is a construction material made up of soil fill that has been strengthened by the addition of rods, bars, fibers, or nets that provide frictional resistance to the soil. The idea of using rods or fibers to reinforce soil is not new. Thin metal strips, geotextiles, and geogrids are currently used as reinforcing materials in the construction of reinforced earth retaining walls. The three components of a mechanically stabilised earth wall are the facing unit, the backfill, and the reinforcing material. Modular concrete blocks, currently called segmental retaining walls are most common as facing units.

The type of facing unit and reinforcing material employed in the system usually determine the process of constructing a mechanically stabilised earth wall. The skin, also known as the facing unit, can be flexible or rigid, but it must be robust enough to hold the backfill in place and allow fastenings for the reinforcement to be connected. The facing units only need a small foundation to be built on, which usually consists of a trench filled with mass concrete that provides a footing similar to that seen in domestic housing.

The construction procedure with the use of geotextiles is explained in Figure 4. Here, the geotextile serves both as a reinforcement and also as a facing unit. The procedure is described below as given by Murthy (2009) with reference to Figure 4.

The design of a mechanically stabilised earth wall involves the following steps (Murthy, 2009):

The general considerations for the design are:

Overexcavation and Replacement of Expansive Soils