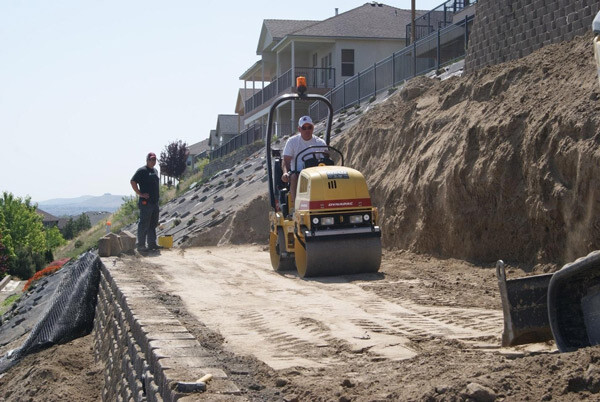 Different forces or loads can be placed on the earth being retained. These loads will produce a surcharge on the retaining structure. Surcharge loads on retaining walls can be permanent or temporary. The most common sources of surcharge are;

These loads vary in spatial distribution and will exert different magnitudes and distributions of lateral pressure. For instance, the surcharge pressure exerted by a uniformly distributed concrete flooring will be quite different from the surcharge load due to an isolated footing close to the retaining wall. Let us now review these possible loads/actions in detail;

According to BS 8002, the minimum surcharge load that should be applied to retaining walls is 10 kN/m2. For shallower retaining walls, the surcharge may be reduced if the designer is confident that a surcharge of 10 kN/m2 will not occur during the life of the structure.

Additional surcharge loading should be used in the design to take account of incidental loading arising from the construction plant, stacking of materials, and movement of traffic both during construction and subsequently unless the nature or layout of the site precludes the need for such additional surcharge. However, as practicable as possible, stockpiling materials close to retaining walls should be avoided.

Uniform surcharge loads such as that due to HA load and 45 units of HB loads (with values of10 kN/m2 and 20 kN/m2 respectively) will exert a rectangular pressure distribution on the back of the retaining wall. The magnitude of the surcharge pressure (ps) will be given by;

Clause 6.6.3 of PD 6694-1 allows an alternative. For global effects on ‘other earth retaining walls’ adjacent to highways, two vertical uniformly distributed transverse line loads of QL, are applied 2.0 m apart on a notional lane of the carriageway, where

Besides normal γQ factors, axle loads and line loads are subject to an overload factor of 1.5 and, when checking a single vehicle in one notional lane, a dynamic factor of 1.4. The dynamic factor dissipates to 1.0 at 7.0 m depth or when convoys of vehicles are considered in each notional lane (representing a traffic jam situation).

In association with the axle loads or line loads, it is suggested that a surcharge of 5 kN/m2 is applied as an imposed load to pavements adjacent to basements. This figure is in agreement with NA.2.36 of the UK NA to BS EN 1991-2 as a maximum uniformly distributed load for continuous dense crowding (e.g. footbridges serving a stadium) and with BS EN 1991-1-1 for traffic and parking areas with vehicles > 30 kN.

Using Boussinesq equations to determine vertical pressure, lateral pressure at a point O on a wall due to a discrete load Q as shown in Figure 3 may be taken as:

It is recommended that horizontal earth pressures against ‘rigid’ walls determined using Boussinesq’s theory of stresses in an elastic half-space should be doubled for design purposes. Boussinesq’s theory for horizontal pressures assumes horizontal movement. However, with truly rigid walls there is actually no movement. So an identical balancing surcharge on the other side of the wall, i.e. a mirror image surcharge, is required and this in effect doubles the pressure. Doubling pressure is in line with field data by Terzarghi and with French practice.

As explained earlier, it is recommended that horizontal earth pressures determined using Boussinesq’s theory of stresses in an elastic half-space should be doubled.

where
Kh = Kad or K0d as appropriate
q = load per metre width of load
α, β = angles (in radians)

Rectangular loads such as pad footings will exert a surcharge load on retaining walls. Standard textbooks provide solutions for vertical stress, σ’v,z at depth z under a corner of a rectangular area carrying a uniform pressure q. It is usually in the form;

Values of Ir are provided for different aspect ratios of the loaded area to depth and can be read from Fadum’s chart. Lateral pressure at the required depth may be determined as KhqIr. The method of superposition allows the determination of vertical stress under any point within or outside the loaded area. An example of this has been presented on how to apply surcharge load from pad footings to retaining walls.