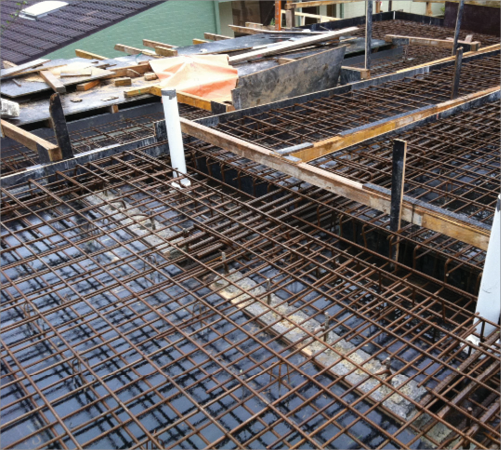 A slab is a structural member whose depth is considerably smaller than the lateral dimensions. They provide useful surfaces for floors in buildings and support the occupancy loads. Reinforced concrete slabs may be supported by beams, columns, walls, or masonry. When a slab is supported on two opposite sides, they are referred to as one-way slabs because the load is transferred from the slab to the beam in the perpendicular direction.

However, if a slab is supported by beams on the four sides, and the ratio of length to width is greater than 2, majority of the load is transferred to the short direction to the supporting beams, and one-way action is obtained in effect, even though supports are provided on all sides.

The structural action of one-way slabs may be visualized in terms of the deflected surface. This can be approximated as a cylindrical surface, and curvatures and bending moments are parallel to the short side Lx. The slab is normally analysed a beam of a unit strip, with the bending moment, shear forces, and reinforcement determined per unit strip.

In many design circumstances, rectangular slabs have dimensions where the ratio of the longer side to the shorter side is less than 2 (and are also supported in such a way that two-way action results). When loaded, such slabs bend into a dished surface rather than a cylindrical one. This means that at any point the slab is curved in both principal directions, and since bending moments are proportional to curvatures, moments also exist in both directions.

To resist these moments, the slab must be reinforced in both directions, by at least two layers of bars perpendicular, respectively, to two pairs of edges. The slab must be designed to take a proportionate share of the load in each direction.

Why are Short Span Critical in Slabs?

Whenever civil engineering students enter a structural design classroom for the first time, they are told that the shorter span is more critical in the design of slabs. This is usually source of wonder for first timers because by mere instincts, the longer span should be more critical.

This article shows very simple proofs why the short span is more critical in slabs.

Let us consider the two way action of the slab shown below;

Looking at the centre-strips highlighted in red, a little consideration will show that at the intersection point of the strips, the deflection is equal. Logical right?

We can therefore say that;

We can verify from the above relationships that;
qx/qy = Ly4 / Lx4

Since Ly > Lx, we can accept that the load on the short span (qx) is greater than the load on the long span (qy) since Ly/Lx > 1.0
This is an oversimplification of the behaviour of slabs though.

Therefore, you can see why the shorter span is more heavily loaded based on the yield line pattern.

From the result, the bending moment parallel to the short span is given below;

In the longer direction;

The load transferred to supporting beams through the short span of the slab is heavier than the load transferred through the long span of the slab. For a one way slab, the slab is analysed as a beam of unit width , and the main reinforcement is provided parallel to the short span, while distribution bars are provided parallel to the long span. Minimum steel can be used as distribution bars.

But for two way slabs, the slab is designed for strength in the two principal directions, but the main bars are placed at the bottom, parallel to the short span, while the other is placed near to the bottom (on top of the bottom bar) parallel to the long span