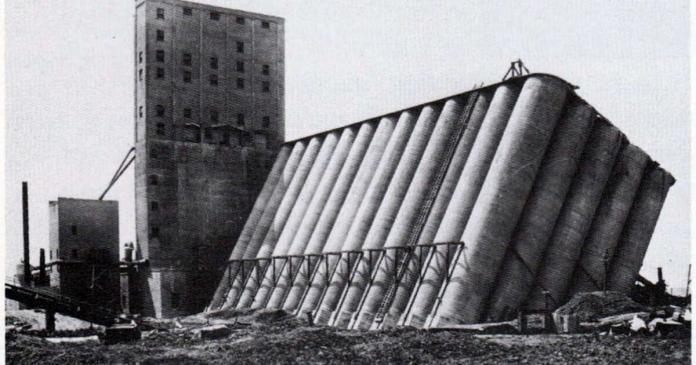 The Canadian Pacific Railway Company in the year 1913 constructed the Transcona grain elevators of about 36400 m3 capacity to provide relief for the Winnipeg Yards during the months of peak grain shipment. The structure consisted of a reinforced concrete work-house, and an adjoining bin-house, which contained five rows of 13 bins, each 28 m in height and 4.4 m in diameter.

Excavation for the construction of the elevator foundations started in 1911, and the first 1.5m depth of soil at the site was rather soft. Beyond the soft clay layer was a relatively stiff blue clay, typical for that area, and locally known as the “blue gumbo”.

According to literature cited by Puzrin et al (2010), no borings or extensive geotechnical investigations were carried out prior to the construction. This is not a surprise, given the level of technology and knowledge about soil engineering at that time. However, an in-situ bearing capacity test (test loading applied using a specially constructed wooden framework) was performed at a depth of 3.7 m.

According to the literature cited by Puzrin et al (2010), the plate load test result indicated that the soil was capable of bearing a uniformly distributed load of at least 400 kPa. The maximum foundation pressure from the bins at maximum load was not expected to exceed 300 kPa, therefore the tests appeared satisfactory to the engineers. Furthermore, they assumed that the “blue gumbo” at the site had similar characteristics and a depth to that on which similar raft foundations of many heavy structures had been founded in the vicinity of Winnipeg. This eventually turned out not to be so.

After the structure was completed, the filling was begun and grain was distributed uniformly between the bins. On October 18, 1913, after the elevator was loaded to 87.5% of its capacity, settlement of the bin-house was noted. Within an hour, the settlement had increased uniformly to about 300 mm following by a tilt towards the west, which continued for almost 24 hours until it reached an inclination of almost 27 degrees (Puzrin et al, 2010).

Several wash-borings were made immediately after the failure, showing that the elevator was underlain by rather uniform deposits of clay. This finding was in agreement with the geological history of the area, according to which extensive fine-grained sediments were deposited in the waters of the glacial Lake Agassiz which came into being when the Wisconsin ice-sheet blocked the region’s northern outlet.

It was noted that no laboratory test was carried out on the samples collected during the wash borings, but classification was done based on visual observation. The wash-borings, therefore, confirmed the designers’ assumptions of uniform clay layer, and the failure of the Transcona Grain Elevator remained a mystery for another 40 years.

It was thought that, if the smaller-scale plate loading tests predicted a safety factor of more than 1.3 (400/300 = 1.33), and the soil profile is homogeneous, how could the foundation fail? The answer to this question was given by Peck and Bryant (1953) who, in 1951 (38 years later), made two additional borings, far enough from the zone of failure to be in material unaffected by the displacements (Puzrin et al, 2010).

On observation of the unconfined compressive strength (qu) result of the site, there are two easily distinguishable layers (Fig. bb). The upper one, a 7.5 m thick stiff clay layer with qu = 108 kPa (undrained shear strength cu = qu/2 = 54 kPa), appears to be resting on a softer clay layer with qu = 62 kPa (cu = 31 kPa). This finding suggests that the elevator failure was most likely caused by the insufficient bearing capacity of its foundation.

In a bearing capacity failure, a failure mechanism is formed below the foundation (Fig. 3b). The settlement takes place much faster and without decrease of the soil volume. Therefore, the displaced soil has to find itself an exit, causing a ground heave in the vicinity of the structure. This ground heave is a distinctive feature of the failure of the Transcona Grain Elevator (Puzrin et al, 2010).

According to (Puzrin et al, 2010), the particular problem of the Transcona Grain Elevator was that the failure mechanisms of the plate loading tests were apparently confined to the upper stiffer clay layer, due to the relatively small size of the plates. The elevator foundation, however, developed a much deeper failure mechanism which entered the weaker clay layer, significantly reducing the bearing capacity.

This led the researchers to consider the two-layer model and other bearing capacity theories that are adequate to describe the situation on the site. Details of this can be found in Puzrin et al, (2010).

It was observed that the true failure contact pressure was 293 kPa. In the original design, it was assumed that the soil profile was homogeneous with the properties of the stiff upper layer uc1 = 54 kPa. In this case, the bearing capacity of the foundation was calculated as 386 kPa (applying the appropriate bearing capacity, shape, and depth correction factors). This was found to be close to the 400 kPa obtained from the plate load tests.

Note that if the soil was homogeneous but with the properties of the weaker lower layer (uc2 = 31 kPa), the resulting bearing capacity would be 251 kPa. If this value was available to designers, the result would actually not be that bad: not only the elevator would not fail, it would not even be too much overdesigned.

A more sophisticated analysis, based on a two-layer model, should produce more accurate predictions. First, the reseachers followed Peck and Bryant (1953) and used the approximate method based on the Prandtl solution using a weighted average of the undrained shear strength. This gave a bearing capacity of 321 kPa which is 10% larger than the failure pressure. While the Prandtl solution for a homogeneous soil is the exact solution, in the two-layer approximation, it was observed that it is not only inaccurate, but it is also not conservative and could lead to failure.

The scoop mechanism, in contrast, provides a remarkably good bearing capacity estimate of 297 kPa. Being an upper bound, this value, as expected, is higher than the true failure pressure of 293 kPa, but only marginally. It would provide an excellent estimate for the design of the elevator if only the Soil Mechanics was more mature in those days and the soil properties were properly determined.