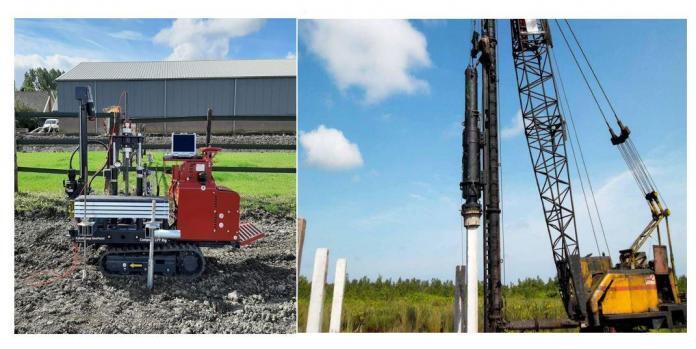 A lot of correlations have been proposed by researchers for relating the results from Standard Penetration Test (SPT) and Cone Penetration Test (CPT) to pile load capacity. In this article, we are going to review how to design pile foundation using SPT and CPT data. It very important that these correlations used in this article and other similar ones should be used with caution, since they are statistical relationships that may not have taken all parameters into consideration. Experience is required to successful apply them to practice.

It is common to use the results of in-situ tests to determine the ultimate bearing capacity of piles in coarse soils because it is difficult to get undisturbed samples of these soils from boreholes. Two fundamental approaches will be discussed in this article, which are SPT and CPT.

In all cases, the allowable load is calculated by dividing the ultimate bearing capacity by a safety factor which usually varies between 2 and 3. The diameter of the pile and the soil’s compressibility both have an impact on the allowable settlement at the working load. Experience has shown that a safety factor of 2.5 will guarantee that an isolated pile driven into coarse soil with a shaft diameter of no more than 600 mm won’t settle by more than 15 mm.

As an alternative, partial safety factors can be used in accordance with the steps outlined in EC7, and the serviceability limit state can be verified through calculation or experience, and if necessary, by performing loading tests. If the “global” safety factor of 2.5 is utilised, these tests are still required unless experience offers a more reliable indicator of settlement behaviour.

For driven piles in coarse-grained soils (sands), Meyerhof (1956) proposed the following relationship between the skin friction (fs) of the pile and the standard penetration number;

The skin friction in piles can be obtained from SPT data using the relationships in Equations (1-3);

where Ls is the length of pile driven in sand, and D is the diameter of the pile.

Alternatively, the standard penetration number can be used to estimate the angle of internal friction of the soil (using Figure 2), which is then used to compute the allowable load on the pile.

The ultimate end bearing capacity of a single pile (Xu and Lehane, 2005) is estimated from;

and D is the external diameter, D* is the effective diameter.

The maximum expected settlement from the equation above is about 10% of the pile diameter.

Several other empirical equations are used in practice. For example, Fleming and Thorburn (1983) suggested that for Equation (7), Cb = 1 and qc–av is the average cone value over an influence zone of 8 pile diameters above the pile base and 2 pile diameters below the pile base, calculated as follows:

The shaft or skin friction is calculated where the sleeve resistance is determined using either an arithmetic or geometric mean value of cone resistance over the buried pile depth. Cone sleeve friction is influenced by soil compressibility and relative density, whereas skin friction on a pile is influenced by pile geometry, roughness, relative density, installation technique, soil compressibility, and pile geometry.

In the case of fine-grained soils, soil consolidation around the sleeve has a significant impact on the cone sleeve friction value. As a result, utilising the results from the cone penetrometer, significant discrepancies between the short-term and long-term load capacity can be anticipated.

As evidenced by the results of the pile tests, the cone penetrometer estimates for the short-term load capacity can be as low as 20% of the long-term load capacity. One of many equations suggested in the literature can be used to predict the cone sleeve resistance if it is not measured. Some of these are as follows:

For both open-ended and closed-ended driven pipe piles, the skin frictional stress (Lehane et al., 2005) is given as;

where Cs is a constant (0.03 for compression piles and 0.0225 for tension piles), h is the distance of the pile section under consideration above the pile base, δcv is the soil–pile interface friction angle correlated to the mean particle size (≈23° for D50 = 1 mm, increasing to 28.88 for D50 = 2 mm for sand on steel) and Ars is the effective area ratio of the pile shaft given as;

Other relationships that have been developed by several other authors are as follows;

where qcs is the cone resistance after adjustments for porewater pressure measured at the cone shoulder, and Cs is a coefficient that depends on soil type, as shown in the Table below;

where σ’rc is the radial effective stress on the shaft and is empirically related to the cone resistance.

You have to exercise caution in using these empirical equations, as they were derived from pile load tests and cone penetrometer data in particular soil types and locations.

A 350 x 350 mm closed-ended square pile is driven into a sand profile to a depth of 10 m. The SPT results are shown in the table below. Estimate the allowable load capacity for a factor of safety of 3.

Use Meyerhof (1956) equations for displacement piles since the pipe pile is closed-ended.