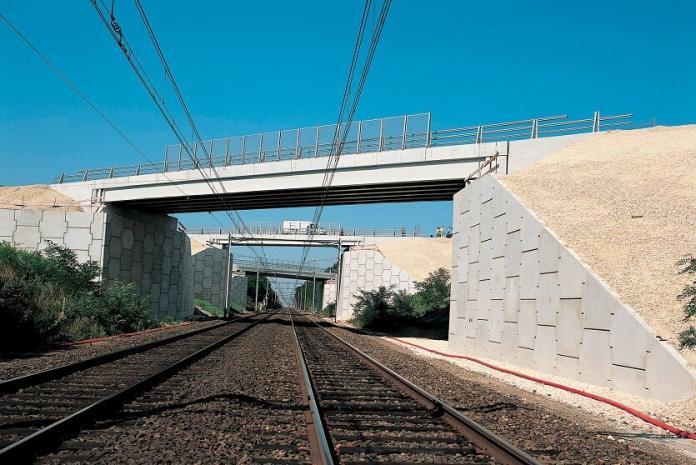 The main purpose of wing walls on an abutment is to contain backfill material behind the abutment wall and minimize carriageway settlement. High lateral earth pressures could result from the containment and compaction of backfill materials. Wingwalls can be found in abutments of bridges and and end of culverts.

Wing walls can be categorised based on where they are located in relation to banks and abutments in the plan. The classification is as follows:

The foundation for free-standing wing walls is independent from the main abutment and is designed as a nominal  cantilever retaining wall. In tis case, it is very possible for the abutment and wing walls to settle and tilt independently (differential settlement). Therefore, it is important to carefully plan the construction joints between the two structures in order to both allow for and conceal the relative movements. The wing walls can be positioned parallel to the abutment wall to accommodate the local topography, which makes compacting the backfill easy and eliminates any design issues, regardless of the deck’s skew angle.

As an alternative, the wing walls can be constructed to follow the path of the over-road and support both the backfill and the parapet fencing. With this structural configuration, it will be more challenging to place the backfill material, and higher earth pressures will result from the restriction against sideways movement. As a result, building this type of design would be more expensive. Instead, wing walls that are tapered in height and spread out at 45 degrees to the abutment may be used.

Use of horizontally cantilevered wings is a second method for creating wing walls parallel to the over-road. For lengths up to 12 m from the abutment, this type of construction is workable, although care must be used while planning the intersection of the wing and abutment wall. Although the building’s common base ensures that it settles as a single unit, it may be challenging to compact the backfill around the wings. This type of rigid construction supports high earth pressures, therefore at the very least, “at-rest” earth pressures should be taken into account when carrying out the design.

A three-dimensional structure is created using this style of abutment and wing wall arrangement. Although the typical metre-strip assumption is frequently utilised, it may not be the best foundation for a design. The existence of the wing walls greatly modifies the vertical and horizontal bending movements in the abutment, and if the wings are utilised to their full potential, an overall reduction in the steel needs is conceivable.

The following loads must be taken into account in the design of wing walls;