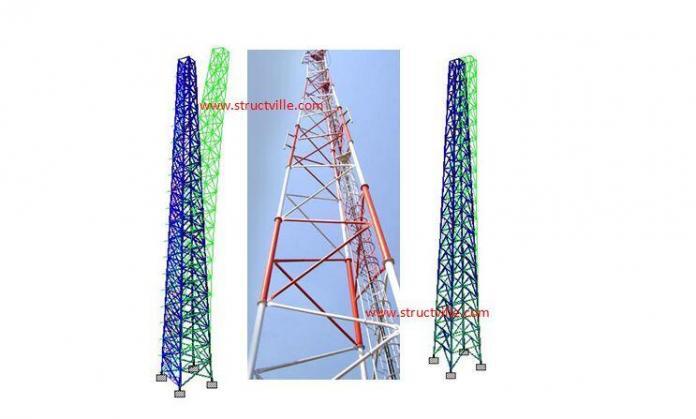 Telecommunication masts or towers are tall structures that are designed for transmission of telecommunication signals or for radio/television broadcasting. Telecom masts are usually made of steel structures of which the members can be made of hot rolled angle sections or circular hollow tube sections. Due to their height above the ground, the effect of wind is quite significant in the design of telecom masts, and may govern the structural design.

Telecom masts can collapse for a variety of reasons of which wind can be one of them. According to Balczo et al (2006),

There are very few cases where masts collapsed, and the reasons for them are in most cases not the wind forces which were taken according to the standard into consideration at stress analyses, but coincidence of other fatal circumstances. … Out of 225 mast failures in Europe only 7 were caused by wind overload. It is also thought-provoking that the wind-storm in 1999 in Denmark caused no collapse of any masts although a number of masts should have been crashed according to the stress analyses carried out by using Eurocode.

However in Nigeria, a telecom mast was reported to have collapsed in Jalingo after a heavy storm in May 2018, which led to loss of lives. A similar incident was also reported in Edo State in the year 2018, after a heavy storm. However, no technical analysis was done to evaluate the cause of the collapse of the telecommunication masts.

In this article, the response of cross bracing configuration (X-braced) and V-bracing structural configuration to wind load will be investigated using Staad Pro software and ASCE-7-2002.

The models used in the study are shown below.

When analysed for self weight and effect of wind load, the following results were obtained.

The maximum internal forces are shown below;

When analysed for the effect of wind, the result below was obtained;

The maximum internal forces are shown below;

The table of comparison is shown below;