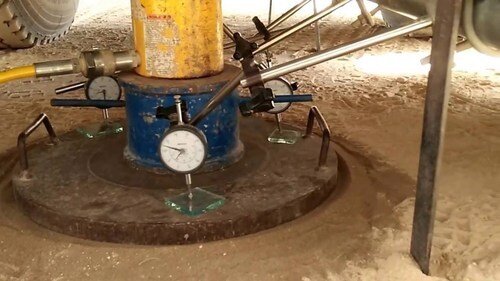 Where;
ks = Coefficient of subgrade reaction expressed in force/length2/length
q = pressure on the surface at the given point
δ = settlement at the same point

Plate bearing test is an in-situ load-bearing test that is used to evaluate the ultimate bearing capacity and likely settlement of soil under a given load. The test can be carried out in accordance with BS 1377 Part 9: 1990. It basically consists of loading a steel plate of known diameter and recording the settlements corresponding to each load increment.

On granular soil deposits, the settlement should take place immediately after the application of load. Therefore, the modulus of subgrade reaction is premised on two simplified assumptions which are;

These two assumptions are however not strictly correct.

Terzaghi in 1955 presented empirical relationships for determining the coefficient of subgrade reactions (ksf) for full-scale foundations, based on results from plate load tests. This is based on a rigid 1 ft x 1 ft (0.305 m x 0.305m) slab placed on a soil medium.

(1) For a square footing on cohesionless soil (B x B);

(2) For a rectangular footing on cohesionless soil (B x L)

(3) For a long strip footing of width B, the coefficient of subgrade reaction is approximately 0.67ksf

(4) For clay soils, it has been observed that the value of ks varies with the length of the footing. Therefore, for clays;

Some formulas suggested by different authors for evaluation of modulus of subgrade reaction are given in the Table below;

One of the most popular relationships between allowable bearing capacity and modulus of subgrade reaction is given in equation (5) according to Bowles (1996);

Where qa is the allowable bearing capacity of the soil, and FS is the factor of safety that was used in converting the ultimate pressure (qult) to allowable pressure (qa). It is important to note that in equation (5), the author assumed a 25 mm settlement value for the soil.

Ping-Sien Lin, Li-Wen Yang, and C. Hsein Juang (1998) made a series of plate-load tests to investigate the load settlement characteristics of a gravelly cobble deposit and estimated the value of modulus of subgrade reaction ks as follows:

The typical values of modulus of subgrade reaction of different types of soils are given below;