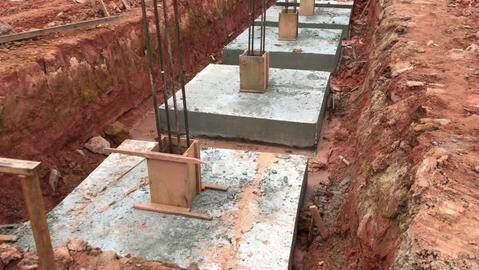 Soil investigation report produced by a geotechnical engineer usually contains the bearing capacity of soil in a site at different depths. The selected depth and bearing capacity used for the foundation design should give an idea of what the minimum depth of foundation should be. A typical example is shown in the table below;

From the table above, if a bearing capacity of 87 kPa has been used for the foundation design, the minimum depth of the foundation should be 1000 mm.

Aside from bearing capacity considerations, it is very important to take the depth of foundations beyond the loose or disturbed topsoil, or soil liable to erosion by wind or flood. When a foundation is founded very close to the ground surface, erosion can lead to loss of bearing capacity no matter how strong the strata is shear resistance.

When the conditions above are met, the major objective should then be to avoid too great a depth to the foundation level. Depending on the nature of the soil, when the excavation of the trench exceeds 1500 mm, supports may be required to keep the sides from caving in. This can cause a lot of disruption to the foundation construction and subsequently add to the cost of the foundation.

Where possible or applicable, the base of a shallow foundation should be kept above the groundwater level in order to avoid the costs of groundwater control and possible instability of the soil due to the seepage of water into the bottom of the excavation. According to Tomlinson et al (1989), it is usually more economical to adopt wide foundations at a comparatively low bearing pressure, or even to adopt the alternative of piled foundations, than to excavate below groundwater level in a water-bearing gravel, sand or silt.

Apart from the considerations of allowable bearing capacity, it is important to extend shallow foundations in clays beyond the soil stratum that is subject to the influences of ground movement caused by swelling and shrinkage, vegetation, frost action, and other effects. Consideration should be given to the stability of shallow foundations on stepped or sloping ground.

For pad and strip foundations, it is usual to provide a minimum depth of 500 mm as a safeguard against minor soil erosion, the burrowing of insects or animals, heave, and minor local excavations and soil cultivation. It is important to note that this minimum depth is inadequate for foundations on shrinkable clays where swelling and shrinkage of the soil due to seasonal moisture changes may cause appreciable movements of foundations.

A depth of 900 mm to 1000 m is regarded as a minimum at which some seasonal movement will occur but is unlikely to be of a magnitude sufficient to cause damage to the superstructure or ordinary building finishes.

For most duplexes constructed in Nigeria where the bearing capacity of the soil is greater than 100 kN/m2 at shallow depths, a depth of 900 mm to 1200 mm is usually adequate for separate column bases.