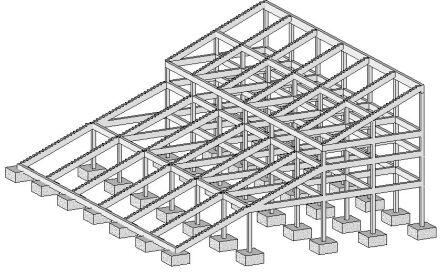 The most common construction concept of sports stadiums today is a composite type where usually precast concrete terrace units (seating decks) span between inclined (raker) steel or reinforced concrete beams and rest on each other, thereby forming a grandstand. The raker beams are usually formed in-situ with the columns of the structure, or sometimes may be preferably precast depending on site/construction constraints. This arrangement usually forms the skeletal frame of a stadium structure.

See a section through the stadium and the L-shaped seating unit below;

Section through the grandstand

This process was used in the construction of Cape Town Stadium South Africa, for the 2010 World cup. See picture below; 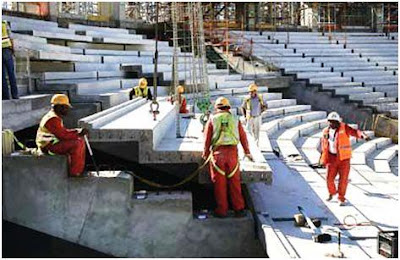 In this paper, a raker beam isolated from a double tiered reinforced concrete grandstand (see picture of the section of the stadium above) has been presented for the purpose of structural analysis and design. Each grandstand frame has precast L-shaped seating terrace units that span in between reinforced concrete raker beams inclined at angles between 20° – 22° with the horizontal. Crowd load and other loads are transferred from the seating units to the raker beams, which then transfers them to the columns and then to the foundations.
Load from the service areas and concourse areas are also transferred using the same load path.

A full 3D Staad Pro Model of the grandstand is shown below; 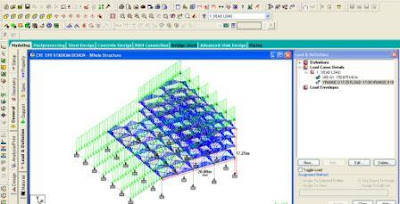 The raker beam was analysed for permanent and variable actions due self weight and crowd loads respectively. Due to its inclination, it was subjected to significant bending, axial, and shear forces. However, design results show that the effect of axial force was not very significant in the quantity of shear reinforcement required. Asv/Sv ratio of 1.175mm (3Y10mm @ 200 c/c) was found to satisfy shear requirements at all sections. The greatest quantity of longitudinal reinforcement was provided at the intermediate support with a reinforcement ratio of 1.3404%. The provided reinforcement was found adequate to satisfy ultimate and serviceability requirements.

See the internal stresses diagram of the raker beam below. It is worthwhile to observe the variation of the nature of axial forces on the beams (i.e from compressive to tensile). The effect was more pronounced when using BS 8110-1:1997 for design than Eurocode 2 (EN 1992-1-1). 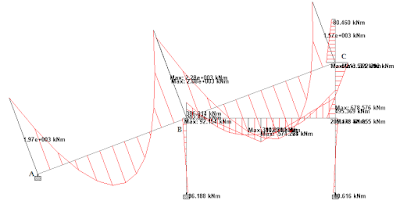 You can view some sections of the reinforced concrete raker beam below; 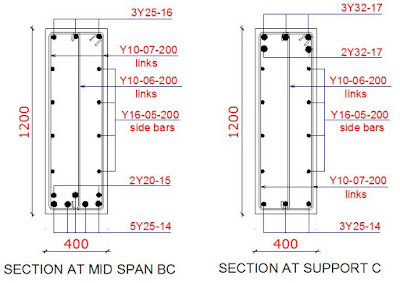