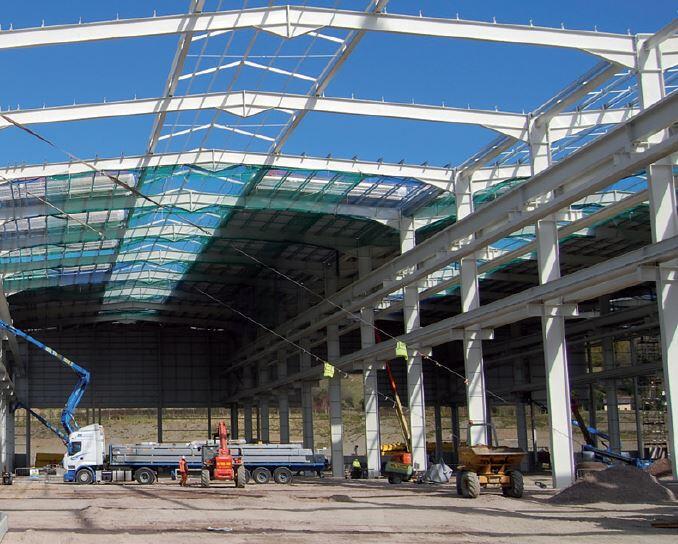 Gravity actions are normally used for verification of portal frames for lateral, buckling, and torsional stability. Elastic analysis and design of portal frames is permitted by Eurocode 3, and the most significant load case (from experience) is the situation where the frame is subjected to gravity load from permanent actions and variable actions, taking into account the second order effects and imperfection. The load combination used for this is usually of the form shown in Equation (1);

In the past we have solved the problem two hinged portal frames which are statically determinate due to the presence of internal hinge at the apex. But it is not a very practical scenario as portal frames are required to be rigid in order to be stable. In this post, we are going to show how you can obtain the effects of actions (bending moment, shear force, and axial force) for a rigid portal frame subjected to an ultimate limit state load of 12 kN/m as shown in Figure 1. We will assume that the same universal beam section will be used for the column and for the rafter (EI = Constant).

A little consideration will show that the frame shown in Figure 1 is statically indeterminate to the first order. Therefore, using force method of analysis, we will need to reduce the structure to a basic system. This is basically a process by which we remove the redundants (excess reactive forces) in the structure, in order to make it statically determinate. As a matter of fact, the basic system adopted must be also be stable. This is shown in Figure 2.

To proceed, we will now assign a unit force to the removed redundant horizontal reaction, and plot the bending moment diagram due to the unit force on the basic system as shown in Figure 3.

Since there is no other redundant, we can apply the external load on the basic system. Due to symmetry of the structure and the loading, we can verify that the vertical support reactions at A and E are given as shown in Figure 4;

On observing Figure 4, we can see that there will be no bending moment in sections A-B and D-E, rather they will be subjected to compressive axial force of 108 kN. For member B-C, bending moment will induced due to the reactive force and the externally applied uniformly distributed load. The free body diagram of member B-C is shown in Figure 5.

The same thing is also happening at section C-D, and the bending moment diagram of the structure is shown in Figure 6

The cannonical equation for the structure is given by Equation (2);

Evaluation of δ11
In this case, the bending moment diagram of the unit force will combine with itself.

The bending moment diagram is shown in Figure 9, and the shear and axial forces can also be obtained accordingly.