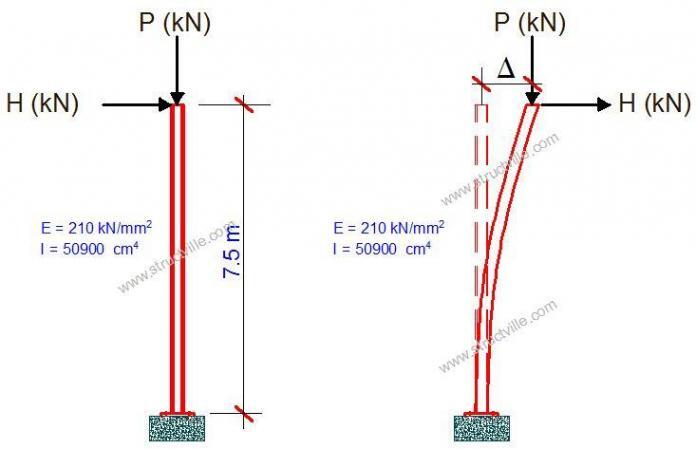 P-delta is a geometric non-linear effect that occurs in structures that are subjected to compressive loads and lateral displacement. Under the action of compressive loads and lateral displacement, tall slender structures will experience additional stresses and deformations due to the change of position of the structure. First-order structural analysis will normally consider small displacements and will compute the equilibrium of the structure and internal stresses based on the undeformed geometry. However, second-order analysis considers the deformed geometry of the structure and may require an iterative approach for the computation of equilibrium.

Let us quickly investigate the effect of P-delta on the cantilever column loaded as shown below.

2nd iteration
The vertical load P acting on the newly displaced column tip (Δ2 – Δ1) results in additional moment M2 at the base;

For all practical purposes, the analysis above will be taken to have converged.

There are two types of P-Delta effects which are;

While large delta is associated with the global displacements and effects on the structure, small delta takes into account the local effects and displacements of the members. The sensitivity of a structure to P-Delta effect is related to the magnitude of the axial load P, stiffness/slenderness of the structure as a whole, and slenderness of individual elements. Second-order effects are prominent in structures under high compressive load with low stiffness or high slenderness. The closer the compressive load is to the critical buckling load, the more sensitive the structure is to P-delta effects.

P-delta analysis combines two approaches to reach a solution which are;

Second-order effects have been incorporated in many codes of practice for the design of concrete, timber, and steel structures. This has usually been included in the design equations and verifications to ensure that the behaviour of the structure stays within the prescribed limits. However, with the availability of advanced computational power of software, engineers are now encouraged to carry out full second-order analysis for design purposes.

The procedure adopted by Staad Pro for P-delta analysis are as follows;

For proper analysis of P-delta effect in Staad, it is important that the vertical and horizontal load cases be combined under one single load case. This can be achieved using the ‘REPEAT LOAD CASE’, which allows the user to combine previously defined primary load cases to create a new primary load case. A REPEAT LOAD is treated as a new primary load which enables the P-Delta analysis to reflect the correct secondary effects. It is important to note that ‘LOAD COMBINATIONS’ command will algebraically combine the results such as displacements, member forces, reactions, and stresses of previously defined primary loadings evaluated independently. Therefore, it is not suitable for P-Delta analysis.

Furthermore, one can perform the P-Delta Analysis in Staad directly by considering the Geometric Stiffness Matrix [KG]. In this approach, the stress stiffening effect due to the axial stress is used directly to modify the actual Stiffness Matrix [K]. In the view of this approach, the compressive force (depending on its magnitude) reduces the lateral load-carrying capacity of the structure. This ultimately modifies the geometric stiffness of the member and is referred to as ‘stress softening effect’. In Staad, the change in the GEOMETRIC STIFFNESS from [K] to [K + KG] can be achieved by using the KG option as shown below.

So, by this approach the P-Delta stiffness equation is directly linearized by the [K + KG] matrix and the solution can be obtained directly and exactly, without iteration.

According to Staad Pro technical manual, there are two options in carrying out P-Delta analysis on Staad;

(1) When the CONVERGE command is not specified: The member end forces are evaluated by iterating “n” times. The default value of “n” is 1 (one).

Let us consider the portal frame loaded as shown shown below.