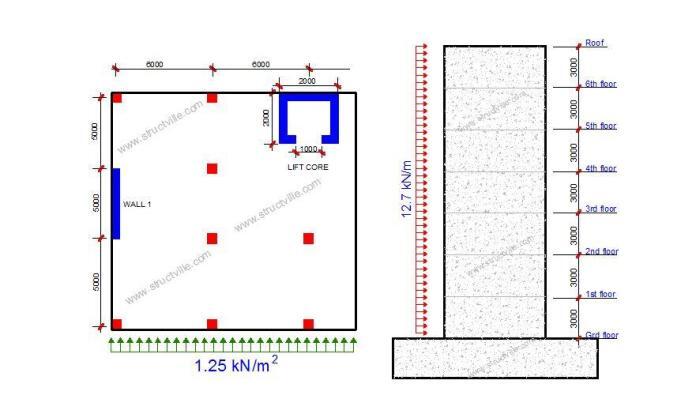 Shear-wall frame interaction for resisting lateral forces is usually complex and may involve tedious manual calculations. However, this can be made simple by using finite element analysis software. It is however easy to transfer wind load manually to shear walls without recourse to the columns. This is the concept that this article explores.

To determine the wind load transferred to shear walls in a building, the load is divided among the stabilising elements based on their stiffness (second moment of area). The stiffer elements attract a greater portion of the load. If the shear walls and other stabilising elements are symmetrically arranged (which is recommended), the center of gravity and the shear center (center of stiffness) coincides and eliminates any potential torsion (twisting) in the building due to the lateral load. However, if the arrangement is unsymmetrical, there will be a twisting moment in the structure that must be properly accounted for in the design.

Let us use an example to show how this done. Consider the general arrangement of a 7 storey building shown below;

The relative stiffness of the elements are as follows;

To calculate the shear centre of the structure, the following procedure can be followed;

We will need to determine the centre of gravity of the lift core. We can easily form a table for that;

Therefore the centre of gravity in the x-direction is ∑Ax/∑A = 1.0 m

Taking moment about the centreline of wall 2;

This shows that in the direction considered, the shear centre coincides with the centriod of the building, hence no torsion. Had there been significant torsion this would have been resolved into +/– forces in a couple based on the shear walls.

The force on each shear wall is therefore as follows;