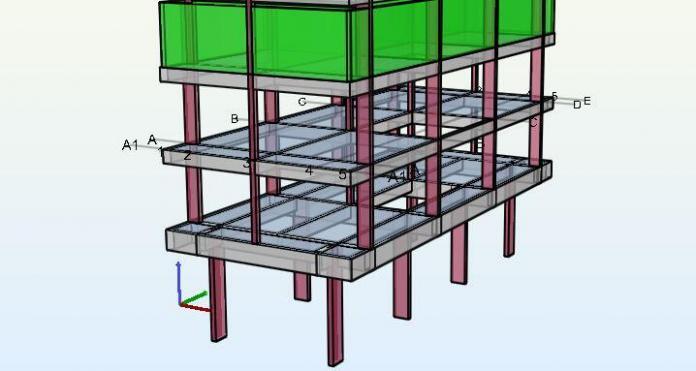 Transfer structures can be described as structures in which the loads from above (usually from columns or walls) are transferred to other structures (such as beams or plates) for distribution to another supporting structure which can resist the load. The prominent issue in transfer structures is that the load path is unconventional, and this is usually found in high rise buildings where floor arrangements differ.

I had my first experience in the design of transfer structures in January 2016, when I was given the project to redesign the Cafeteria Hall of Ritman University Community Centre. Initially the arrangement of the structure was as shown in Fig 1 below;

It was desired to reduce the intermediate columns of the ground floor to single column as shown below;

On analysis of the structure, I discovered heavy shear concentration within the intermediate support, which lead to increase in the beam depth, and provision of heavy main and shear reinforcement within the region. This modified arrangement is an example of a transfer structure in its simplest term. The floor beam carrying those upper columns could be described as a transfer beam.

I dare to say that transfer structures should be designed by experienced engineers, especially those who are very with conversant with construction. This is mainly because the design of transfer structures demand that the engineer will play with the depth, width, and reinforcements being provided by the design software.

For example, I analysed and designed a 5 storey building (G+4) using Orion Software. The building was a typical transfer structure wherein the all the ground floor columns terminated on the first floor. The rest of the columns that got to the roof started from the first floor, and they were all sitting on the 1.5m cantilever beams wrapping round the building at the first floor level (see image below). 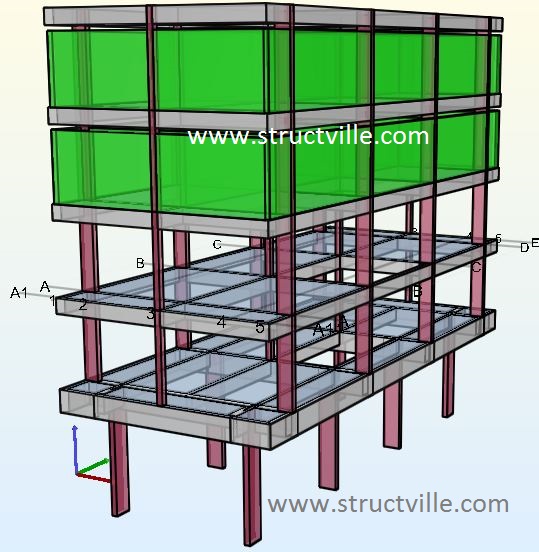 For the design of the structure, I started with a trial depth of 600 mm for all the first floor beams, with a width of 230 mm. It was a major disaster in flexure and in shear as expected for a 5 storey building. I increased the depth to 750 mm while maintaining the same width of 230 mm. Most of the spans started looking okay (especially for the longitudinal beams), but the cantilever regions were still failing in shear. At this point, I increased the width of the cantilever regions to 300 mm. (The idea is that when you are very sure that flexure is okay, instead increasing the depth, you can increase the width of the beam in order to reduce the shear stress).

In summary, one of the major issues of transfer structures is shear, and more often than not, you will require more than two legs of reinforcement to satisfy shear. It is sometimes recommended that strut and tie method is better for analysis of transfer beams.

Furthermore, architects should bear these challenges in mind when designing buildings with transfer structure configuration by increasing the head room of the building. When the head room is high enough, there is enough flexibility for proper design  by manipulating the width and depth of the beams as appropriate. The suspended ceiling can drop below beams in order to have a flat ceiling finish that will conceal the irregularities of the beam geometry. However, keep formwork (cost, construction, reusability) in mind while manipulating your dimensions (remember that I hinted on experience in construction).

Note that there will be need for side bars since the depth is 900 mm, but I cannot find some in the drawings anyway. So the drawings are all yours to play with. Thank you for visiting Structville today and God bless you.

Do you know that you can partner with Structville to champion infrastructure development in Africa. Send an e-mail to info@structville.com for more information.