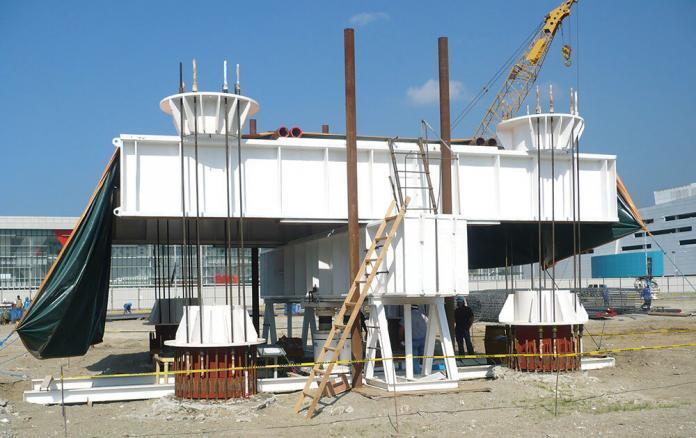 In our previous articles, we defined the failure load as the load that ultimately causes a pile to fail, or the load at which the soil’s bearing capacity is fully mobilised. However, in an engineering sense, failure might have occurred long before the structure was subjected to the maximum load because of the structure’s excessive settlement.

Engineers generally agree with Terzaghi’s assertion that, for practical purposes, the ultimate load can be defined as the load that results in a settlement of one-tenth of the pile’s diameter or width. However, the settlement at the working load may be excessive if this criterion is applied to piles with a large diameter and a nominal safety factor of 2.

The allowable load is almost always determined purely by tolerable settlement at the working load in situations when piles are serving as structural foundations. For every given type and size of pile in any soil or rock conditions, the engineer should be able to predict the load—settlement relationship up to the point of failure when calculating the allowable loads on piles.

In most cases a simple procedure is to calculate the ultimate bearing capacity of the isolated pile and to divide this value by a safety factor which experience has shown will limit the settlement at the working load to a value which is tolerable to the structural designer. But where settlements are critical it is necessary to evaluate separately the proportions of the applied load carried in shalt friction and end-bearing and then to calculate the settlement of the pile head from the interaction of the elastic compression of the pile shaft with the elasto-plastic deformation of the soil around the shaft and the compression of the soil beneath the pile base.

In all cases where piles are supported wholly by soil and are arranged in groups, the steps in calculating allowable pile loads are as follows;

The overall goal should be to adopt the highest working load on each individual pile while keeping the number of piles in each group as small as possible. As a result, pile caps will be smaller and less expensive, and the group settlement will be at a minimum. However, excessive settlement that causes intolerable differential settlements between neighbouring piles or pile groups may occur if the safety factor on the individual pile is too low.

The diameter and length of the piles in the case of isolated piles or piles arranged in very small groups will be determined only by taking into account the settlement of the isolated pile at the working load. Installation methods significantly impact the carrying capacity of piles. The interaction between the pile and the soil is influenced by a number of variables, including whether a pile is driven or cast in situ in a bored hole, whether it is straight-sided or tapered, and whether it is made of steel, concrete, or timber.

Engineers shouldn’t have very high expectations for formulas used to determine the carrying capacity of piles and shouldn’t be upset if the calculations show failure loads that are off by plus or minus 60% of the failure load determined by test loading. It should be kept in mind that a full-scale foundation is being evaluated when a pile is subjected to test loading.

It is not surprising that there could be relatively large differences in failure loads on any given site given the typical variability in ground conditions and the influence of installation techniques on ultimate resistance. If full-scale pad or strip foundations were loaded to failure, engineers would not be surprised to see such huge differences.

The alternative is to calculate allowable loads or design bearing capacities by dynamic formulae. These will give even wider variations than soil mechanics’ methods and, in any case, these dynamic formulae are largely discredited by experienced foundation engineers, unless they are used in conjunction with dynamic testing and analysis using standard equipment.